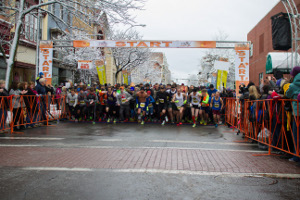 The event, which has been run consecutively since 1964, kicked off at 8 a.m. with the area’s only 10K. A record 1,562 runners started the 6.2-mile run, which doubled as the USATF Adirondack’s Men’s and Women’s Championship. Macky Lloyd (Albany, NY) outkicked his rivals to win the prestigious crown and the accompanying $250 first place prize, posting a 31:18 finish. First across the line in the female division was Megan Hogan (New York, NY), in 35:31, who also earned a $250 payday.

Following the 10k, 5,012 runners toed the line on Fourth and Fulton Streets for the 5K, the day’s main attraction. Participants were in a celebratory mood as they pounded the pavement along River Street, which was lined with thousands of cheering spectators. Brandon Allen (Windsor, Ontario) was the first male to hit the finish tape at Monument Square, registering a 15:28 finish. Female bragging rights went to Kerry Caher, (Clifton Park, NY), who finished in 18:13.

“Twenty-four hours ago we weren’t sure how the snow was going to impact the event,” said Event Director George Regan. “But this morning what we had was really a beautiful winter landscape which served as a fantastic backdrop for the 67th Troy Turkey Trot. We welcomed the third largest field in the history of the event and saw so many smiles coming across the finish line. The City of Troy’s DPW and utilities crews have our gratitude for working overnight to clear the snow and to make the course safe for our participants on this special day.”

For the second year running, 5K participants donned colorful costumes ranging from forks and spoons to gift-wrapped presents as part of the day’s popular costume contest. 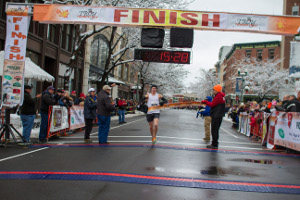 Earlier on, 514 kids took part in the Grade School Mile, a fun chip-timed event for children in the 8th grade and below. Meanwhile, 389 opted to burn off their pre-meal calories at a slower pace by tackling the Turkey Walk, a one-mile fitness walk that followed the same course as the Grade School Mile.

Thanksgiving is a time of reflection and giving back and participants gave generously to the Trot’s two designated charities. Registrants raised $7,430 through online registration donations to benefit the Regional Food Bank of NENY, while $4,407.50 was donated through online registrations to support Joseph’s House and Shelter, Inc., a Troy-based not-for-profit whose mission is to prevent and alleviate homelessness. Hundreds of participants and spectators also brought non-perishable food items to give to local food pantries.

“The City of Troy is so proud to share Thanksgiving morning with so many families and individuals from all over the Capital Region and beyond,” added Troy Mayor Lou Rosamilia. “It really is a community event in its truest form.”

-30-
About the Troy Turkey Trot
Founded 98 years ago in 1916, the Troy Turkey Trot is the nation’s 12th and world’s 64th oldest road race, as well as the 11th largest Turkey Trot in the nation. The event, which draws as many as 8,000 participants from 37 states and features a 5K, 10K, Grade School Mile and Turkey Walk, is designed to celebrate fitness, families and tradition against a backdrop of some of Troy’s most historic neighborhoods. For more information, visit www.TroyTurkeyTrot.com.