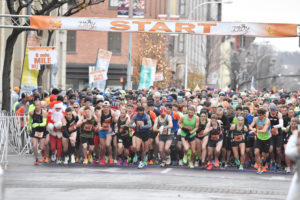 The event, the 11th largest and 12th oldest Turkey Trot in the nation, stepped off at 8 a.m. with the area’s only 10K. During the 6.2-mile run, which doubled as the USATF Adirondack’s Men’s and Women’s Championship, Ricardo Estremera (Tallahassee, FL) outpaced his rivals with a time of 30:59 to win the prestigious crown and the accompanying $250 first place prize. First across the line in the female division was Karen Bertasso (Albany, NY), in a time of 36:26 who defended her 2015 win and also earned a $250 payday. 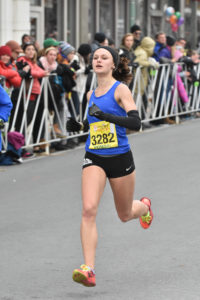 More than 4,720 then toed the line on Fourth and Fulton Streets for the 5K, the day’s main attraction. Participants were in a celebratory mood as they wove along River Street, which was packed with cheering spectators. Jonathan Aziz, of Boulder, CO, was the first male to hit the finish tape at Monument Square. Aziz finished in 14:57, just four seconds shy of his course record of 14:53 set in 2015. Female bragging rights went to Courtney Breiner, of Albany, NY, who finished in 17:30.

“It was a wonderful day to be in Troy, NY on the 100th anniversary of the founding of this race,” said Event Director George Regan. “We had a fantastic turnout of family, friends and the entire community coming together and doing something in common. It’s a great way to celebrate the Thanksgiving holiday.” 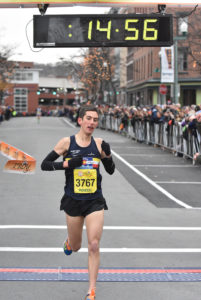 Regan also referenced the charitable aspect of the race, which is being supported by Pioneer Bank, an event sponsor.

“We are on track to raise more money for our charitable partners Joseph’s House and the Regional Food Bank of Northeastern NY through this event this year than any other year,” Regan said. “More than $10k alone has been raised so far through our generous participants and we have more coming in from our technology partner ALIN. Our event sponsor Pioneer Bank will continue to receive funds at all of their regional branches over the next few weeks as well so we fully expect to get to our $20k goal.”

Earlier on, 500 children took part in the Grade School Mile, a fun chip-timed event for children in the 8th grade and below. Meanwhile, a group of 400 opted to burn off their pre-meal calories at a slower pace by tackling the Turkey Walk, a one-mile fitness walk that followed the same course as the Grade School Mile.

Thanksgiving is a time of reflection and giving back and participants gave generously to the Trot’s two designated charities, the Regional Food Bank of Northeastern New York and Joseph’s House and Shelter, Inc., a Troy-based not-for-profit whose mission is to prevent and alleviate homelessness. Hundreds of participants and spectators also brought non-perishable food items to give to local food pantries.

“The City of Troy is so proud to share Thanksgiving morning with so many families and individuals from all over the Capital Region and beyond,” added Troy Mayor Patrick Madden. “It really is a community event in its truest form.”

-30-
About the Troy Turkey Trot
Celebrating its 100th anniversary, the Troy Turkey Trot is the nation’s 11th largest turkey trot and 12th oldest road race, as well as the world’s 64th oldest road race. Drawing as many as 7,000 recreational runners and walkers from 37 states and featuring a 5K, 10K, Grade School Mile and Turkey Walk, the event is designed to celebrate fitness, families and tradition against a backdrop of some of Troy’s most historic neighborhoods. For more information, visit TroyTurkeyTrot.com.