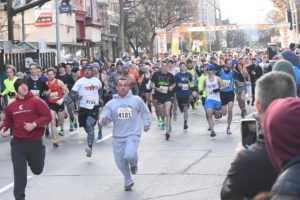 7,195 participants take part in the 70th running of the Troy Turkey Trot on Thanksgiving Day in Troy, NY. (Click image for high-res.)

TROY, NY (Nov. 23, 2017) — The Troy Turkey Trot, one of the largest and oldest Thanksgiving races in the nation, celebrated its 70th birthday in style today, as 7,195 participants from 34 states and two Canadian provinces gathered with family and friends to burn off some pre-Thanksgiving meal calories.

The day began at 8 a.m. with the area’s only 10K featuring 1,703 participants. Along the out-and-back course, Anthony Giuliano of Schenectady, NY outpaced the competition in a time of 33:08 to win the prestigious crown and the accompanying $250 first place prize. First across the line in the female division was Ivette Mejia of New York City, who finished with a new course record of 33:41 and also earned a $250 payday.

“I get great pleasure from seeing so many people making this annual event part of their Thanksgiving plans,” said longtime Event Director George Regan. “If you see the joy that it brings to both the young and the young at heart, it’s clear to see why Thanksgiving has overtaken July 4th as the busiest day in the nation for runners.”

Following the 10K’s conclusion, an enthusiastic group of 453 children took to the streets for the Grade School Mile, a fun chip-timed event for children in the 8th grade and below. They were soon followed by 426 participants in the one-mile Turkey Walk.

With many already contemplating turkeys roasting in the oven back home, more than 4,613 then toed the line on Fourth and Fulton Streets at 10 a.m. for the 5K, the day’s main attraction. Participants, many of whom took part in the 5K’s popular costume contest featuring prizes for “Best Thanksgiving Day Costume” and “Best Non-Thanksgiving Costume,” were in a celebratory mood as they wove along River Street, which was packed with cheering spectators. Jonathan Aziz of Boulder, CO was the first male to hit the finish tape at Monument Square, finishing in a time of 14:57 – just four seconds off from his course record of 14:53, set in 2015. Aziz is now a three-time defending winner at this event. Female bragging rights went to Caitlin Abelseth of Voorheesville, NY crossing the line at 17:30.

Jonathan Aziz of Boulder, CO breaks the tape first in the men’s 5k at the 2017 Troy Turkey Trot in Troy, NY on Thanksgiving Day. (Click image for high-res.)

Thanksgiving is an opportunity to help less fortunate members of our community, and participants gave generously to the Trot’s charities, the Regional Food Bank of Northeastern New York and Joseph’s House and Shelter, Inc., a Troy-based not-for-profit whose mission is to prevent and alleviate homelessness. Hundreds of participants and spectators also brought non-perishable food items to give to local food pantries.

“This event really has become the gold standard of Turkey Trots,” added City of Troy Mayor Patrick Madden. “There’s an event for everyone, so there’s no reason not to come to the Collar City and enjoy the fun.”

About the Troy Turkey Trot
Now in its 70th year, the Troy Turkey Trot is the nation’s 12th and world’s 64th oldest road race, as well as the 11th largest Turkey Trot in the nation. The event, which draws as many as 8,000 participants from 37 states and features a 5K, 10K, Grade School Mile and Turkey Walk, is designed to celebrate fitness, families and tradition against a backdrop of some of Troy’s most historic neighborhoods, as well as raise funds for several local charities. For more information, visit TroyTurkeyTrot.com.