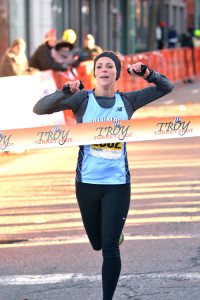 TROY, NY (Nov. 28, 2013) — On a day set aside for Capital Region families to come together and give thanks, a near record-setting 7,855 participants braved the cold and wind to descend upon the home of iconic Uncle Sam this morning for the 66th annual Troy Turkey Trot, America’s 12th oldest road race.

Following a new schedule that ensured that runners had plenty of time to get home to prepare for Thanksgiving Day celebrations with their loved ones, the event got underway at 8 a.m. with the 10K, which also doubled as the USATF Adirondack’s 10K Championship.

During the 6.2-mile run, which returned to the traditional “out-and-back” course configuration and attracted a record-setting 10K field of 1,508 competitive runners from Plattsburgh to the Hudson Valley, Ricardo Estremera (Albany, NY) captured the prestigious crown and the accompanying $250 first place prize with a time of 31:51.  First across the line in the female division was Nicole Blood (Altamont, NY), who also earned a $250 payday with her winning time of 36:26. The 10k course records remained intact, as was to be expected, on this unusually cold and breezy day. Those records were set by Tom Dalton in 1980 (29:43) and Ellen Predmore in 1984 (34:26).

At the 10K’s conclusion, a registrant field of 5,288 then gathered in new colored start sections to ensure a safe kickoff on Fourth and Fulton Streets for the day’s main attraction, the 5K. The runners, many of whom were bedecked in colorful costumes ranging from Santa Claus to Spiderman, were in a celebratory mood as they hit their stride along River Street, which was lined with thousands of cheering spectators.

Female bragging rights went to Elizabeth Maloy of Albany, NY, with a time of 16:39. Maloy has several Troy Turkey Trot victories to her name and last year ran15:24 at the Olympic Trials for the 5,000m distance. The wind and cold proved too much today in the records department, however, as Christine Bergeron’s16:03 record (set in 1983) will continue to stand as the time to beat for the women.

Launched this year was a costume contest recognizing individuals/groups in two categories:  “Best Thanksgiving Day Costume” and  “Most Unique Costume”. Winners and photos will be available ontroyturkeytrot.com.

Earlier this morning, 591 kids in the 8th grade and younger took part in the Grade School Mile, a fun, participatory event that utilized chip timing this year.

Winners included  Collin Regan (6:03) of Rochester, NY for the boys and Emily Drake (7:01) of Clifton Park, NY for the girls.

Meanwhile, a group of more than 468 opted to burn off their pre-meal calories at a slower pace by tackling the Turkey Walk, a one-mile fitness walk that followed the same course as the Grade School Mile and finished on River Street at Monument Square.

As usual, Troy Turkey Trot participants gave generously to charities that help improve the quality of life for thousands of Capital Region residents.  Registrants raised $7,593.50 through online registration donations to benefit the Regional Food Bank of NENY (Regional Charity), while $2,762.25 was donated through online registrations to the CYO of Troy (Local Charity). Hundreds of participants and spectators also brought a non-perishable food item to the Troy Atrium to give to local food pantries.

“We’re thrilled that so many families showed up today, demonstrating that family participation is truly the foundation of this event and the reason it has been around for the past 66 years,” said George Regan, who has directed the Turkey Trot since 2012.

“The City of Troy is so proud to share Thanksgiving morning with so many families and individuals from all over the Capital Region and beyond,” added Troy Mayor Lou Rosamilia, who soaked up Troy’s historic architecture as a participant in the Turkey Walk.  “It really is a community event in its truest form.”

For post-race results and photos, visitwww.TroyTurkeyTrot.com.

About the Troy Turkey Trot

Now in its 66th year, the Troy Turkey Trot is the nation’s 12th and world’s 64th oldest road race, as well as the 11th largest Turkey Trot in the nation.  The event, which draws as many as 8,000 participants from 37 states and features a 5K, 10K, Grade School Mile and Turkey Walk, is designed to celebrate fitness, families and tradition against a backdrop of some of Troy’s most historic neighborhoods.  For more information, visit www.TroyTurkeyTrot.com.