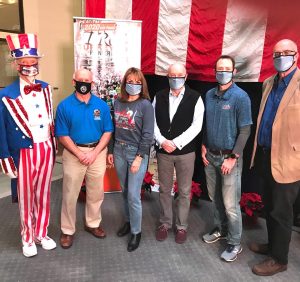 TROY, N.Y. (Dec. 1, 2020) — Organizers of the Troy Turkey Trot, one of the nation’s oldest and largest Turkey Trots, said today that 2,632 participants from 36 states, two Canadian provinces and the nation of Turkey participated in the event’s 73rd virtual edition, which was held Thursday, Nov. 26 through Saturday, Nov. 28.

The largest swath of participants took part in the event’s 5K (1,791), while 569 Trotted in the 10K, 170 strolled in the Turkey Mile Walk and 102 children in the eighth grade and below competed in the Grade School Mile.

“It’s extremely gratifying that so many people continued to support the Trot during these challenging times,” said Troy Mayor Patrick Madden. “The pandemic has caused a tremendous amount of isolation and our hope was to bring friends and families together through our custom mobile app, which allowed participants to race with others, real time, regardless of their location. The app gave Trotters a memorable experience and helped families with loved ones around the country feel like they were connected.

“The virtual format also presented us with an unparalleled opportunity to share the spirit of the Troy Turkey Trot — fun, family and fitness — with 14 other Troy communities across the nation,” Madden continued. “It was tremendously heartening to have elected officials from Troy, Kan., Troy, Mich. and Troy, Ill. accept our invitation and participate during the event’s three-day running window.” 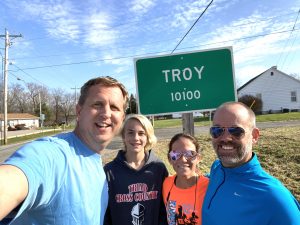 Although the Trot drew 41 percent of its 2019 field (6,400 participants), Trotters donated $18,500 — a record amount — to the Regional Food Bank of Northeastern New York and Joseph’s House & Shelter, during online registration.

“This event was a huge success in terms of raising funds to fight two insidious disorders in our society, hunger and homelessness,” added Event Director George Regan. “To raise more money than we have ever raised with significantly fewer participants says something special about Trotters’ giving spirit. These donations will make a major impact to these organizations as they feed hungry families and provide warm shelter to homeless men, women and children.” 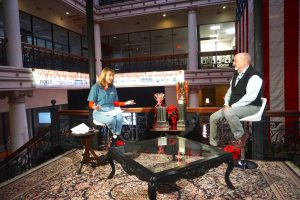 Organizers reported that their inaugural livestream Thanksgiving morning was also a great success. Filmed at the Frear Building, which is undergoing a significant redevelopment by the Bryce Companies, the show featured live reports from the virtual leaderboard and interviews with Mayor Madden, the event’s charities and longtime participants. A replay of the broadcast can be viewed here:  https://tinyurl.com/y3dgjcyo

About the Troy Turkey Trot
Now in its 73rd year, the Troy Turkey Trot is the nation’s 12th and world’s 64th oldest road race, as well as the 11th largest Turkey Trot in the nation. The event, which celebrates fun, family and fitness against a backdrop of some of Troy’s most historic neighborhoods, draws as many as 8,000 participants from 40 states and features a 5K, 10K, Grade School Mile and Turkey Walk, while also raising funds for the event’s two charities, Regional Food Bank of Northeastern New York and Joseph’s House and Shelter. For more information, visit TroyTurkeyTrot.com.